The French Bulldog, affectionately known as a ‘Frenchy’, is a popular small dog breed. It’s easy to see why, as these charismatic little tanks make easygoing and loyal companions.

Frenchies actually originated in England before being brought to France as ratting dogs for migrant lace workers. Their sweet nature secured their place as a beloved pet for french locals, and they were eventually named after their adopted country.

Since then, the French bulldog has made many appearances in art and popular culture. For example, famous owners and fans include Collete, Toulouse Lautrec, the Romanov family, Hugh Jackman and Reese Witherspoon!

Physical Appearance of the French Bulldog

French Bulldogs have a distinct barrel-like body, a Brachycephalic (squashed) face and pointed bat-like ears. They have sleek coats that come in a variety of colours such as black, white, brindle or fawn. Their build is stocky and compact, standing up to about 30cm tall and weighing between 10kg to 15kg.

French Bulldogs are easygoing and adaptable dogs that are willing to make new friends wherever they go. As such, they are great companions for singles, couples and families alike.

These dogs are chilled out and attentive, and will bark only when they feel there is a real need to protect their family. On that note, they can be a little territorial when their favourite humans make contact with unfamiliar dogs. Therefore, early socialisation and training are important.

As Frenchies love company, this isn’t a dog for those who are away for long stretches of time. Likewise, a lonely French Bulldog will show their unhappiness through destructive behaviours such as digging and chewing. Therefore, be sure to make a plan to have someone home during the day, such as a regular pet sitter. 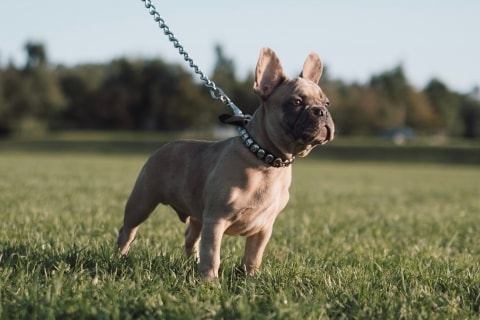 French Bulldogs don’t require hours of exercise, however do need to go outside for a stimulating walk at least 20 minutes each day. Be sure not to overdo it as they can overheat easily, especially on a warm day. As such, keep walks to the early morning and evening during summer.

Frenchies need to enjoy their training, so be positive and playful and they will be much more open to learning. This is also important to remember during house training. Harsh corrections won’t get you far with these bright little dogs, who can have a stubborn streak.

Living with a French Bulldog

French Bulldogs are suited to living in most homes. Their adaptability makes them perfect for inner-city homes and apartments, as long as you have access to the outdoors for exercise. They also get along well with children and other pets, as long as they receive enough attention themselves!

Frenchies can be very sensitive to warm weather and should be kept inside in air condition when the temperature goes up. Therefore, keep plenty of water bowls around the house and don’t walk them when it’s hot outside. 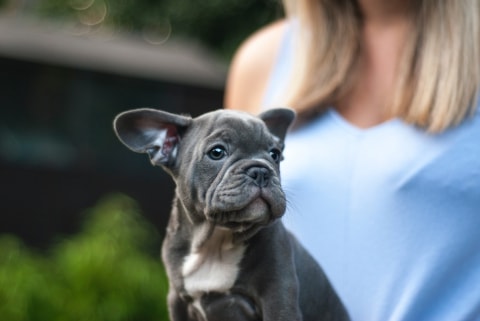 French Bulldogs have a lifespan of about 11 years. Notably, there are some specific health problems you should be aware of as part of responsible ownership.

Health conditions in French Bulldog’s include:

It’s essential to use an excellent breeder when adopting a Frenchy. You owe it to your furry friend to give them their best chance at a happy, long life, so do your research before bringing a pup home.

French Bulldogs have a short, smooth coat that is easy to groom with a weekly brush. Expect some shedding a few times a year, but regular brushing will keep most of it at bay. Wash your Frenchy only when they get smelly, as their coat has natural oils in it to keep it clean.

It’s important to wipe your Frenchie’s wrinkles, folds and eyes out several times a week. As with all dogs with Brachycephalic faces, these features can get infections and sores if not kept clean and dry. Furthermore, you should also keep an eye on their ears and give them a clean if they are looking gunky.

Clean your Frenchy’s teeth regularly with dog toothpaste to avoid dental decay, and have their nails clipped with they grow too long.

Need a pet sitter that has experience with French Bulldogs? Check out Pawshake - we have thousands of sitters, many of whom have specific experience with this breed. Just enter your suburb in the search bar to see who is nearby.

Don’t be spooked - here are the main things to think about to keep your pet safe on Halloween, so you can plan ahead and enjoy the day!

If you plan to become a pet sitter, it will make your job easier to have some basic pet sitting equipment on hand.

Some pets are more relaxed than others when taking medicine, however, it’s common for pets to hate this experience. Here's what to do if so.